6 mobile units & 5 games in the Twin Cities on 1 day For Fox Sports North. 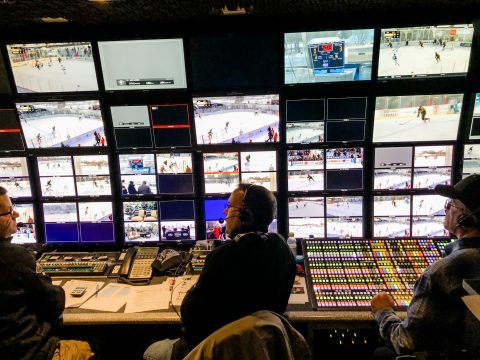 “Fox Sports North Delivers Its 14th Hockey Day Minnesota In Its Own Backyard. A full day of production in Minneapolis included five games, three of them at an outdoor rink.”

What if I told you that Fox Sports North’s annual outdoor production marvel, Hockey Day Minnesota — in Minneapolis this year, the 14th year as a marquee event on the RSN’s calendar — was nearly 50 degrees warmer than it was a year ago, and yet it was still nearly buried in snow with wind gusts pushing temps well below freezing?

That’s just part of the charm of broadcasting live outdoor hockey, and, in a place like Minnesota, it’s a fact that production and operations crews here actually take a unique pride in.

“We look forward to this every year,” says Bob Rohde, director, operations, Fox Sports North, which is based in Minneapolis. “We work on it bit by bit throughout the year. And, as much as we complain about the weather, we really get fired up by it and rally around it. It’s a strange kind of bragging rights.”

All in all, Fox Sports North broadcast 16 hours of continuous hockey programming on Saturday, comprising five live games, three of which were held outside at Parade Stadium. (A men’s college hockey game was played indoors at St. Cloud State.) The day was capped by a Minnesota Wild–Dallas Stars matchup at Xcel Energy Center in St. Paul

Fox Sports North had six production trucks from Mobile TV Group in the Twin Cities on Saturday: its two primary units were at the Hockey Day festivities, and extra mobile resources were brought in to work the Wild game in St. Paul and the Timberwolves game (yes, the Timberwolves alsoplayed on Saturday) at Target Center in Minneapolis. Rodhe gave credit to MTVG EICs Bill Poore and Dan Murrie for their work in pulling it all off. In addition, ARCTEK Satellite Productions supported the efforts with satellite uplink.